We want to make our website more user-friendly and continuously improve it. If you continue to use the website, you agree to the use of cookies.

RIGIPS ON THE OUTSIDE MEANS SUSTAINABILITY INSIDE

In 1860, Wenzel Günter, Director of the Vienna Neustadt locomotive factory, instigated a search for coal in the Puchberg Basin - but all he discovered was gypsum! This marked the beginning of industrial plaster production. The owners changed over the course of time until the foundation of Rigips in 1938. The company name RIGIPS consists of "Riga", the location in Latvia of the first plasterboard factory, and "Gips", the German word for gypsum/plaster. The Puchberg plant was extended to become a competence centre for plaster powder products within the Saint-Gobain Group in 2003.

In 2014, ESA was entrusted with modernising the entire mixing and metering control system, acceptance of raw materials and the loading of semi-finished and finished products, including SAP data exchange. Production was shut down in December 2015 for installation and commissioning.

According to the contract, production had to restart - at least at a restricted level - with the new ESAweight metering control system, including data exchange, after no more than 14 days. ESA set to work with 2 commissioning teams and 2 installation teams simultaneously in the individual areas of the plant. After just one week, loading of "semi-finished products" was handed over to Rigips. At the begin of January, the official commissioning process was completed and the transition made to trial operation and production support.

At its Puchberg plant, Rigips mostly produces powder products, such as filler compounds, plaster and joint filler. New products are constantly being conceived and others refined.

The changeover took place within a very narrow time frame and production resumed on schedule. The delivery process was also adapted in line with our requirements and now all departments are satisfied with the new, integrated system from ESA. 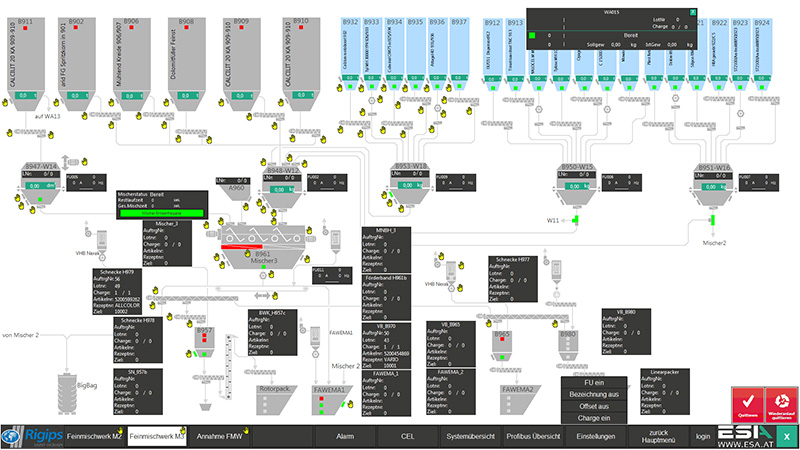